Our family caring for your family.

Most people rely on funeral directors to bring sensitivity and dignity to funeral arrangements, and those are two of the fundamental principles of independently owned and family managed Abbey Funeral Services Ltd. Founded by Jim and Chris Parker in 1983 and joined by their daughter Jo, in 1996 the award winning Tonbridge based firm have cared for families in Tonbridge, Tunbridge Wells, Southborough, Hadlow, Hildenborough, East Peckham, Pembury, Paddock Wood and neighbouring areas ever since.

Chris and Jim have both been National President of the Society of Allied & Independent Funeral Directors (SAIF) and have always believed in providing the highest standards. This was the first time that both a husband and wife had been honoured in his way in any funeral related trade organisation. Jo has now been elected to be the National President in 2022/23 making this a double first for Abbey with three members of the family over two generations being elected by their peers to become National President. “We are immensely proud to have been elected to represent our profession in this way.” 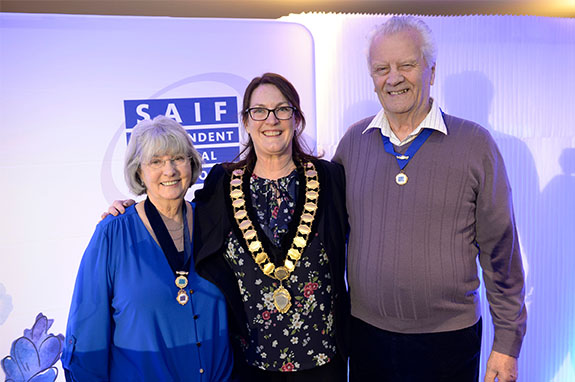 Although now both retired, Jim still attends the funerals of people he has known and Chris has a deep involvement with training and education in the wider profession serving the Independent Funeral Directors College as first Director of Education and then Principal for many years. In addition Chris is involved in running the company’s unique bereavement support programme, Friends Together, a network that cares for over 1500 members of their community.

Having worked for the family for over 26 years Jo is very much the face of Abbey overseeing all of the day to day business and taking over from her mother, Chris, as Managing Director in September 2019. The firm has thus remained at the forefront of industry best practice and is well respected by both the local community and within the profession.

We are committed to ensuring that every family is supported throughout and beyond the funeral of their loved one. We will listen sensitively to your wishes and endeavour to provide the service that is right for you, your family and your loved one.

We take staff training seriously and so our staff are all fully trained for the job that they do, with all of our full time client facing staff trained to industry standard NVQ awards. Every member of our staff is also a dementia friend and has attended a dementia awareness training session.